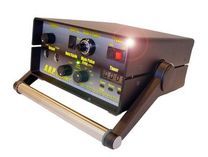 ARP is an acronym for Accelerated Recovery Performance, a system comprised of proprietary technology and protocols created by Denis Thompson founder of ARPwave. ARP uses a patented bio-electrical current, simultaneously with active range-of-motion and other exercise techniques, to significantly speed up the body's natural recuperative ability. ARP is based on the premise that injury is the result of the muscle’s inability to absorb force. The electrical stimulation device (the ARP) possesses specific characteristics that are not found in any conventional therapeutic neuromuscular electrical stimulator (interferential, microcurrent, galvanic, Russian stim, iontophoresis).

The ARP uses direct current (DC) compounded with a high-frequency double exponential, patented background waveform. This background wave is harmonious with the body and significantly reduces skin and fatty tissue impedance allowing much deeper penetration of the direct current without the side effects of skin burning.

Also, the unique waveform produces minimal inhibitory protective muscle contractions allowing an active range of motion during therapy and training. This permits eccentric (lengthening) contractions to occur which are critical to treatment.

How Is It Performed?

All ARP treatments work on the principle that joint problems, tears, sprains, fractures, or repetitive task injuries are caused by muscles not properly absorbing force. This energy propagates to tissue not intended to accept the force. We identify the muscles that are incapable of doing their job and treat them by placing electrode pads on the area to eliminate the cause of these symptoms. Most of the time, the symptom of pain or weakness will be resolved. We do not treat the specific bone fracture, joint problem, or tear, but treat the muscles so they can perform their normal role of stabilizing the site.

Who should consider ARP?

ARP treatment is indicated for the treatment of all muscle-related injuries.

ARP protocols can also be specifically used with the ARP to accelerate muscle rehabilitation of the following:
​​​​​​​

The Science Behind ARP

The cellular processes of tissue and bone healing are complex and multifactorial. The scientific basis for ARP treatment is the positive cellular effects of direct current electrical fields on these processes. Direct current has been shown to affect cellular migration and orientation, endothelialization, protein synthesis, and calcium regulation, as well as stimulation of new bone formation and fracture healing. (4,6,7,10,18,19,21,22,24,25)

The initial response after an injury is coagulation modulated by plasma platelet cells that form fibrin clots to stop bleeding. The clots attract polymorphonuclear neutrophils (PMNs) and fibroblasts that, in turn, adhere to the clots forming a fibrin gel. The PMNs consume bacteria and wound debris by secreting proteases.

Direct current electrical fields can modulate a number of factors involved in the healing response. A major process that is affected by direct current is cellular migration and orientation. Cooper and Keller, working with amphibian neural crest cells exposed to a direct current field, demonstrated a migration of cells towards the cathode with a resultant perpendicular cellular orientation. (7) In further studies, Cooper and Schliwa concluded that cell locomotion could be controlled with manipulation of the direct current field. (8) This process, called galvanotaxis, has been demonstrated also in neutrophils, macrophages, and fibroblasts. (10,18,21,22,23)

Intracellular processes are also affected by exposure to direct current. Cheng et al established that relatively low levels of direct current can raise the adenosine triphosphate (ATP) level by almost 500 % and increase protein synthesis and membrane transport. (6) Bourguignon et al demonstrated an uncapping of insulin receptors on the cell membrane and enhancement of protein and DNA synthesis within the first minute after direct current stimulation. (4)

New bone formation and fracture healing are positively affected by the application of a direct current electrical field.(11,12,14,17) The net effect of direct current on bone is an increase in osteoblastic activity and new bone formation around the cathode. These effects are optimally demonstrated with a current level of 5 to 20 microamps. Studies have shown increased spinal fusion rates and increased the healing of fracture nonunions. (5,9,13)

The basis for these hypotheses is the large retrospective clinical data on ARP treatment over the past 5 years. In general, recovery rates for acute soft tissue injury have been 60% to 80% shorter than the predicted clinical outcome. Specific examples include grade II lateral ankle sprains, and grade II acute hamstring injury.

These accelerated recovery rates also extrapolated to the more severe grade III injuries, as well as chronic soft tissue tendinopathies. In many cases of chronic tendinopathy, all other conservative measures were exhausted, without relief of symptoms, before ARP treatment was initiated.

The ARP experience has produced a sense of astonishment among both the practitioner and the patient. Undoubtedly, prospective data will be required to corroborate these retrospective findings, but it is certainly clear that the rate of acceleration in healing has been dramatic.

For non-urgent questions or to learn more about our services, contact us today!
​​​​​​​

Please use the form below to request an appointment. Our team will connect with you shortly to confirm your appointment. Thank you!